If you haven’t discovered Lulu’s Hot Tamales and American food yet now is your chance!

Specialising in creative American inspired fare, Lulu’s has a mission to make tamales a “thing” in Sydney’s inner west pub and brewery scene and is popping up at the Midnight Special Wednesday through Sunday nights from 5pm until Sunday April 15.

We asked Lulu’s chef/owner Monica Luppi about the inspiration behind her tamale’s and american style food:

What is a tamale? “That’s the most common question I get and I actually have a hard time describing them myself! They have fresh, Mexican flavours, steamed corn parcels filled with meat or vegetables topped with all sorts of fresh ingredients. Think a taco that gets it on with a dumpling. My tamales are steamed parcels of fluffy corn dough stuffed with meat (12 hour chipotle pork shoulder) or vegetables (slow roasted sweet potato and melty Oaxaca cheese) and topped with fresh pico de gallo or charred corn salsa. The vegan tamale features vegan cumin lime sour cream, and they’re all gluten free.”

What was the inspiration behind your food? “I grew up on the US West Coast and got addicted to tamales in the Mississippi Delta, where they’ve been a part of African American culture for over a hundred years, brought up by Mexican immigrants.  There are so many varieties but since I am a California girl, I had to load mine up with fresh salsas and pickles”.

What else can we find on the menu? “The rest of the menu features not-your-usual American cuisine: fried mac and cheese punched up with Old Bay seasoning and topped with bright orange Cheezel dust, a New Orleans Italian sandwich called a “muffaletta” stuffed with meats, cheese and diced olives and pickles, a Mexican inspired chicken katsu burger, and more.”

Tell us more about Lulu’s philosophy: “Our philosophy is to make flavour-packed ‘food with a conscience’: We favour local and independent producers and retailers and use fresh, ethically sourced ingredients.  A percentage of profits from each popup has gone towards helping people in need. I come from a background in social enterprise so it’s natural for me to look at the community and social impact of what we do with our food. We favour local and independent producers and suppliers because their quality is just incredible”.

Lulu’s popup at The Midnight Special will run Wednesday through Sunday nights from 5pm from Thursday, until Sunday April 15.  We can’t wait to check them out!

All images courtesy of Nash Ferguson © 2018 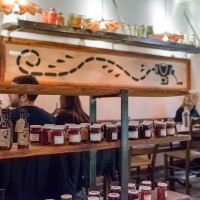